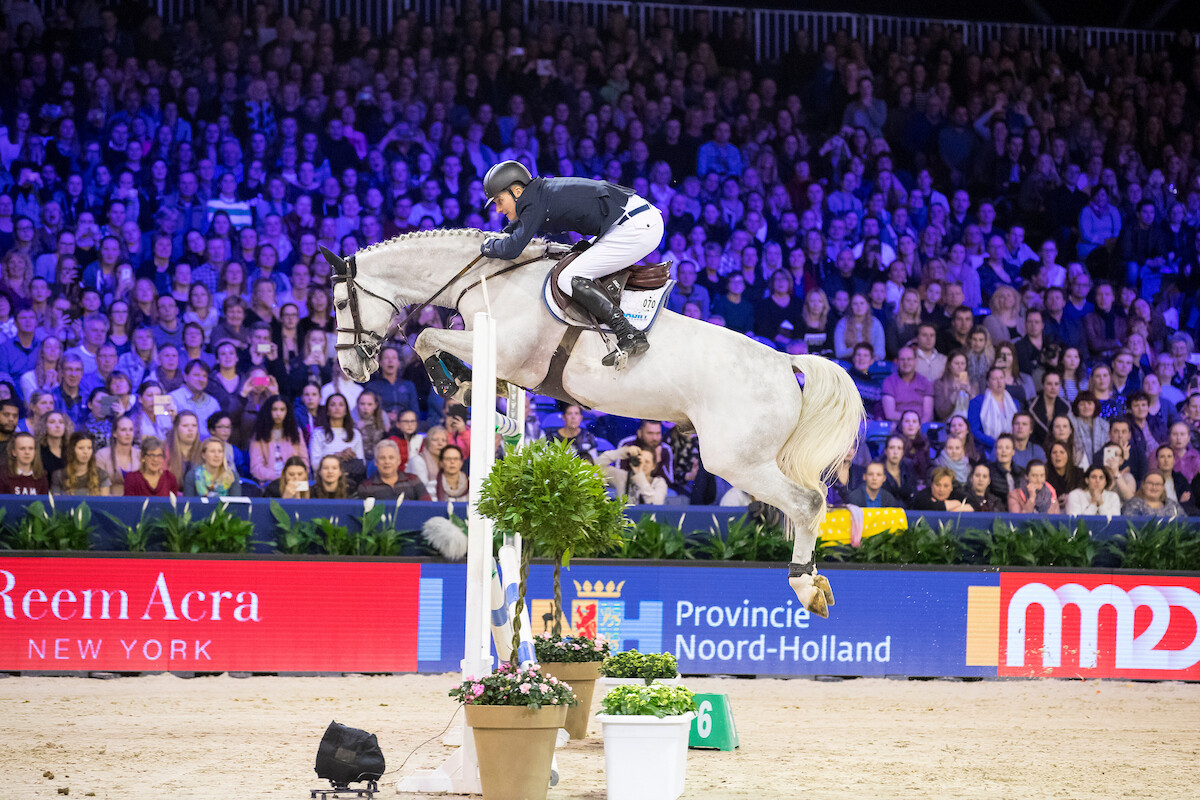 Emir R continues to be noticed all over Europe and further afield for his athletic, modern type beautiful looking progeny who stand out for the right reasons. They also are known for inheriting their sires fantastic temperament.

In 2020, Kaatje AD (Emir R x Papillon Rouge) claimed the 5 year old Swedish Showjumping Champion of the year followed in 2021 with Richard Howley with a win in Bonheiden and 2nd in Lanaken in the 6 year old class.

We also seen the stunning MBF Major Lazer K (Emir R x Landseiger ) feature as reserve highest priced horse at the Goresbridge Go For Gold Sale in Ireland, being sold for 79,000 euros as well as other progeny making top sale prices all over the world.

Emir R no doubt is proving that he as a relatively young stallion as yet, is already and will be a very influential sire for the future.

Emir R performs well in sports and breeding. Under Rolf-Göran Bengtsson they have already put down quite a number of great performances, including Hagen, Amsterdam, Sommersted, De Lier and Rotterdam. The qualities of his offspring are also noticeable and in 2018 Emir R got his first son KWPN approved named Kitt SB bred by the co-owners of Emir R, Gebr. Brouwer. Emir R is also the father of several approved sons.

Offspring of Emir R also stand out exceptionally well in free jumping and young horse competitions. They often seem to have good reflexes, are sharp, show power and they all have a beautiful type. Abroad, the offspring of Emir R does not go unnoticed. In the summer of 2019, the Emir R son Kadans SB (mv. Hilton) became the champion of the four-year-old Eventing horses in Osberton(England) and winner at Millstreet International and winner in the Kilculkey 4 Year Old Final in Ireland.

In 2019 Rolf Goran Bengsston and Emir R ran a great series of clear rounds. This combination stood out positively during the Grand Prix of Paderborn, Herning, Lichtenvoorde and Kronenberg. Emir R has also made its 1.60m debut and the planning for 2020 internatinally at 1.60m level.

If there had been anyone who doubted the ability of Emir R, then the eight-year-old Colman son with his performance in Jumping Amsterdam this year certainly removed any doubt. Emir R was the only one to defy the 1.90m under Michael Greeve in the "RAI Amsterdam Six Bar Challenge".

Emir R gives his rider the feeling of unlimited power and his win in Amsterdam was definitely not a fluke as one week later at the KWPN stallion show in Den Bosch with only a few tenths of a second, Emir R finsihed second in the VHO Trophy Competition.

He is one of the last approved stallions from Stal Roelofs; the stable in Den Ham that has left a heavy mark on the jumping horse breeding in the Netherlands.

Emir R is the only KWPN-approved son of Colman, the top progenitor who in turn descends from the Olympic stallion Carthago. The mother of Emir R, B. Termie R 23 passed her mare test with 88 points and carries the elite predicate. In sport she competed to 1.30 level. Her father Rupert R (by Mermus R) competed at 1.60 level with Peter Charles in the saddle. Emir R's grandmother, the Voltaire daughter T.Termie 21 is a half-sister of the KWPN stallions Mermus R, Odermus R and the international jumping horse Vainquish (by Namelus R). 21 the Sam R son A.Termie who has already been released by several riders at 1.50 level.

Official KWPN Research Report 2009:
Emir R is an honest and reliable stallion with a good attitude. He has good vision and has a nice mouth. Emir R jumps with good reflexes, good leg technique and good back use and he finishes the jump very well behind. Emir R seems careful and shows a lot of power. Emir R has much to very much talent for jumping and gives his rider a good feeling. 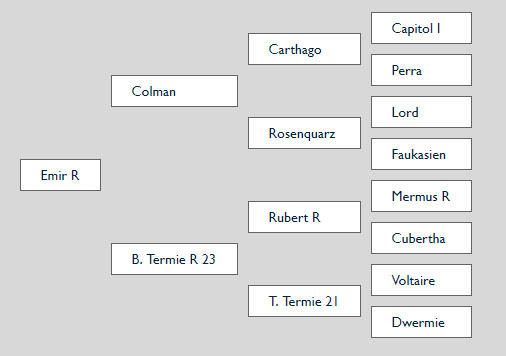