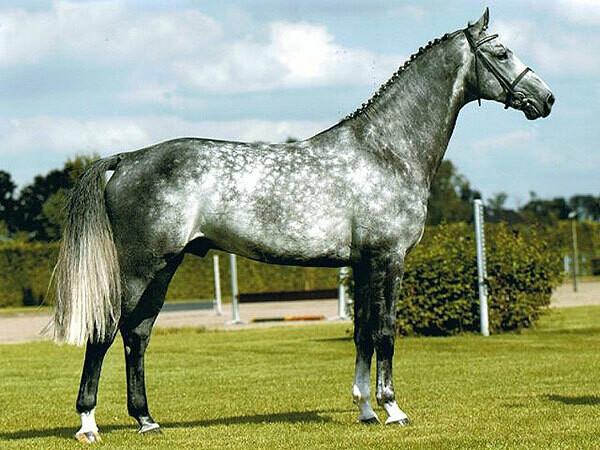 Odermus R’s sire is the proven breeding stallion Calido I, who passed on his performance genes to international jumpers, such as Acapulco, Calli, and Scotch. Calido I’s granddam is Kollet, who produced Little Rock. The stallion Ukato is also from this line. Calido I has spent more than a decade in the world top 100 jumping sires ranking.

Damsire Ramiro was one of the greats of modern sport horse breeding.

Odermus R was champion of the KWPN performance test in 1999. This top all-around horse scored very high in both the jumping and dressage sections of the test.

In competition Odermus went well up to 1.45m in international competition, before a cracked heel forced retirement.

Odermus R already has 31 international offspring, a big number for such a young stallion (2012). The Berlin-Brandenburg Champion stallion Olympic Fire met high expectations last year, excelling at the performance test in Neustadt-Dosse. The son of Odermus R was awarded with 8.77 for his jumping ability.

Mares to use with this stallion: